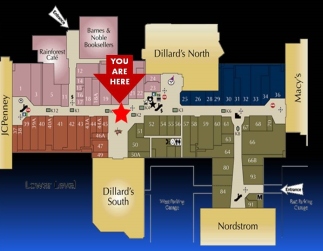 In the mall there is always a directory which is strategically placed. The diagram consists of all the places in the mall that you could possibly go with numbers, names and other indicators. The one extricable important piece of information is the words YOU ARE HERE! This piece of information is the most important as you need to know where you are, before you can determine how to get where you want to go.

I was struck with the revelation of importance of location when my father, who was 86 years old, had to make a major move in his life. He had been ill over the past year and the doctors instructed the family that he could no longer live by himself. He moved to Mobile Alabama over 20 years ago with his second wife but the marriage ended 3 years after their arrival which left him to maneuver a place that was unfamiliar to him. Fast forward to 2013, he had been alone for quite a while and a decision had to be made quick, fast and in a hurry. His age prevented him from returning to New York and after a family discussion, my oldest niece decided to bring her grandpa to live with her in Orange Park, a suburb of Jacksonville, Florida.

My father was thrown into a mode of uncertainty and confusion as the pace was executed to lightning speed. Upon my father’s arrival to his new home his first reaction was, “I feel lost”. Immediately I heard Psalm 139 verse 7 resonating in my head”Where can I go from Your Spirit? Or where can I flee from Your presence? If I ascend into heaven, You are there; If I make my bed in hell, behold, You are there.”  My dad’s feeling of being lost is normal given the circumstances, but one thing is sure and that is our Heavenly Father knows where we are and He is always there leading, guiding and comforting us in times of change. In a previous post I wrote about “who moved my cheese” and one thing is evident; the cheese is constantly moving.  We have to make a decision on how to deal with the many changes that life brings on a daily basis.

Now let’s go back to the mall directory, the sign YOU ARE HERE indicates your present location. The reason the sign knows where you are is because the mall designers  knew you would be standing there trying to navigate your way, just as God our creator (designer) knew where you would be at this place in your life. He is not surprised by your decisions.  You first need to understand where you are and then make a decision on how to maneuver through the mall in the least amount of time.

In the bible, four lepers were faced with a YOU ARE HERE moment as they stood in front of the gate of Samaria.  It is at this point they determined, if they returned to Samaria they would surely die, for it was a great famine in the land. The other alternative was to walk into the enemy’s camp, for perhaps they would find food even if it meant still being killed. “And at twilight “ (IIKings Ch 7:5) they moved from the gate towards the enemy’s camp to find no one was there. The camp was completely deserted except for the gold, horses, donkeys, food and drink and all material items. What the lepers didn’t know was at the same moment they took a step to move, God moved.

II Kings Chap 7: 6 for the Lord had caused the Arameans to hear the sound of chariots and horses and a great army, so that they said to one another, “Look, the king of Israel has hired the Hittite and Egyptian kings to attack us!” 7 So they got up and fled in the twilight and abandoned their tents and their horses and donkeys. They left the camp as it was and ran for their lives.”

In the bible there are many other examples of relocation necessary for God to move in our lives. Location is not predicated on geographical movement. It could be a change of career, job, relationship, business, school or environment, or simply a change in your  mindset. The end of the year is fast approaching and it is time for reflection.  At this time you are looking at the sign “YOU ARE HERE” then access the map through prayer and inquire of the Lord what your next steps should be and then be ready to move.

Keep in mind ” Your location is not your destination!”